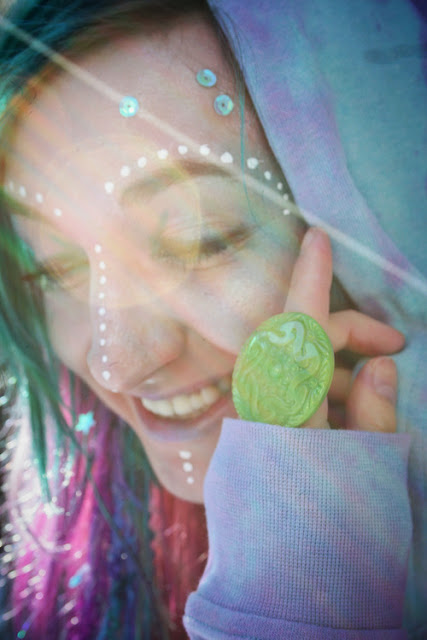 Q&A with Marisa the Cosmic Nomad!

I think this girl is one cool chick, from the a mountain town in the US. She's an acid sister and i love her style!

How would you describe your style?
I feel like my style is what you get when you combine tribal nomads, Edie Sedgwick, circus runaways, Sid Vicious, Stevie Nicks and Jim Morrison with Harajuku girls, Alice, a healthy appreciation for the history of fashion, a disco in a galaxy far far away, snowboarding culture and a good helping of LSD.

I really believe that fashion is art that you get to live your life inside of and I approach the way I dress the same way I create art - it’s mixed media and I’m a living sculpture.
I enjoy combining visually interesting bohemian patterns with solid neutral colors like black and nude, and love relaxed, slouchy, layered looks with many small, intricate details. I value vintage and handmade pieces over anything else, and am on the hunt for new things for my collection virtually 24/7 no matter where I am. My favorite materials are wood, silver, leather, silk and modal.

What has influenced and developed your style throughout the years? (family, friends, music genres, lifestyle, etc)?

My mother was born in ‘59 and had moved to California at 16 with a one way ticket and a suitcase to get herself away from a less than stellar home environment and had become deeply interested in the late 60’s early 70’s holistic, spiritual, natural hippie scene happening along the west coast - she began sewing her own clothing, became a silver smithing apprentice, grew a little bit of herb, learned to make most foods completely from scratch and then some, and eventually owned a quilting shop that she would close when she moved back to the midwest.
Growing up I had bolts of fabric in my living room, and when I was 7 my mother began teaching me to sew - by 8 I was experimenting with drafting my own clothing, although not very well at all. There was always fabric to use, though and my mother’s twice passed along Husqvarna Viking took my learning surprisingly well.
This coincided with my introduction to the internet, and what would in about 5 or 6 more years be just the beginning of the DIY phenomenon.
I first started experimenting with my fashion sense with the intent of making a statement in middle school and gravitated originally to punk rock. I love subculture that toes the line with pure costume still to this day, and punk attracted me with its otherness. This was also tied in with the first shows I was going to with my friends by ourselves - ska and punk rock underground garage stuff on the outskirts of Chicago. My family actually lived in the countryside of Indiana, surrounded on either side by rednecks and corn fields for as far as the eye could see.
I didn’t get much cultural influence other than my hippie mother and occasional trips into Chicago, so rebelled the Hot Topic way for a minute or two. My mother however had always taken me to thrift stores (making part of our living from selling antique things on Ebay), so from a young age I was being trained in the art of the thrift store hunt. I also had an interest in anime that eventually lead me to become interested in Japanese culture as a whole and then for me to spend several years collecting Japanese fashion magazines. I also spent a lot of time reading fantasy as a kid - I was always fascinated with the thought of there being a whole OTHER world out there, and loved things like fairies and elves.
When I was 16 two significant things happened - the first was that I was given a Singer sewing machine for my birthday, and the second being that my family moved from the middle of nowhere in the midwest to smack dab in the center of the Colorado Rocky Mountains… in a ski resort town. I would be bullied relentlessly at my new high school before graduating at age 17, a highschool junior who then went straight to a community college. Somewhere along the way I had been introduced to some awesome electronic music coming out of Colorado and other parts of the country - kids like Pretty Lights, MiMOSA, Big Gigantic and of course Sound Tribe Sector 9 and Lotus became my daily listens, replacing Tool and Korn and The Offspring. My style was slowly being infiltrated with influence from the electronic jam music and snowboarding mountain culture that I was living in. I began working at a small boutique, originally intended to sell novelty tshirts to ski tourists but owned by a very unusual 65 year old woman who had mixed designer jeans and eclectic clothing in with the usual tourist apparel, whom loved Cirque du Soleil, had hiked the Appalachian trail with just her 5 year old son and went both to Woodstock and Woodstock 2 on a whim by herself. She became a major influence in all areas of my life, and she introduced me to the music of everyone from Muddy Waters, Cab Colloway and Bonnie Raitt to Infected Mushroom and Goldfish. I traveled back to the midwest in 2011 for a rave in a grungy Chicago warehouse followed shortly by Summer Camp music festival and was blown away by the fashion kids were using to express themselves - from the cotton candy rave gear to the tribal influenced leather festival pieces. I knew it was where home was - I started seriously pushing myself to sew and create costumes to wear to the increasing number of festivals and shows I was going to and it was true love. And of course, somewhere in there I was introduced to the psychedelic experience and my entire perception of color, pattern and symbolism got flipped upside down. I have a significant memory of the day after an intense trip going into a well organized thrift store and staring at the rows of contrasting patterned tshirts and just being thrilled at the way things could be combined to tease the eye. With psychedelics came even more curiosity about the original hippies, Ken Kesey, The Doors and all the culture of that period, and the more I explored the more I felt my visual library expanding. Today some of my favorite lines are Sugarhigh + Lovestoned and Spell and the Gypsy Collective 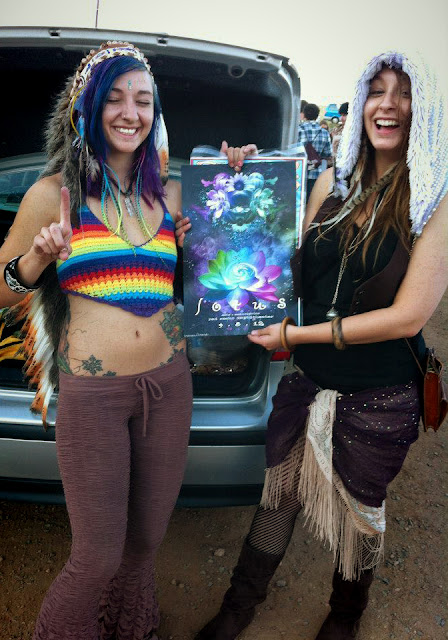 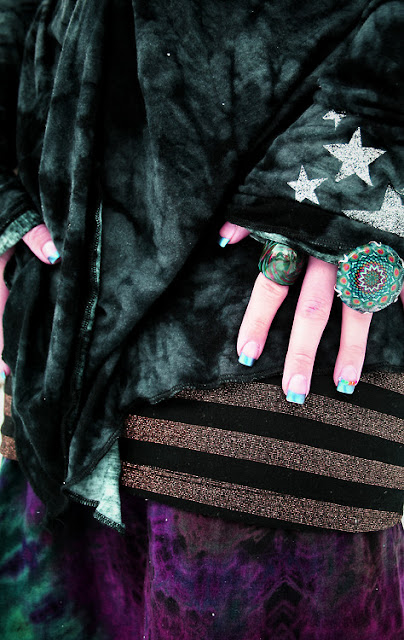 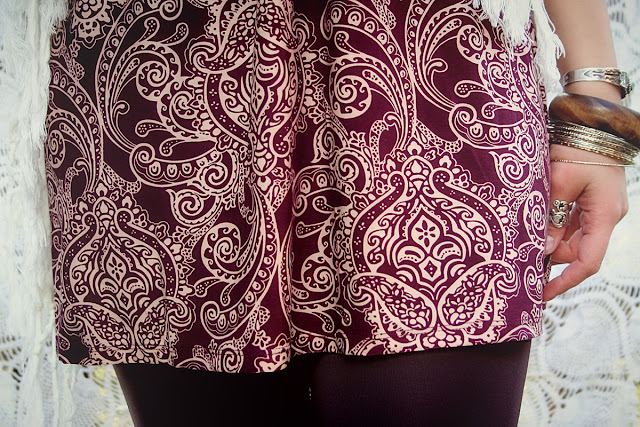 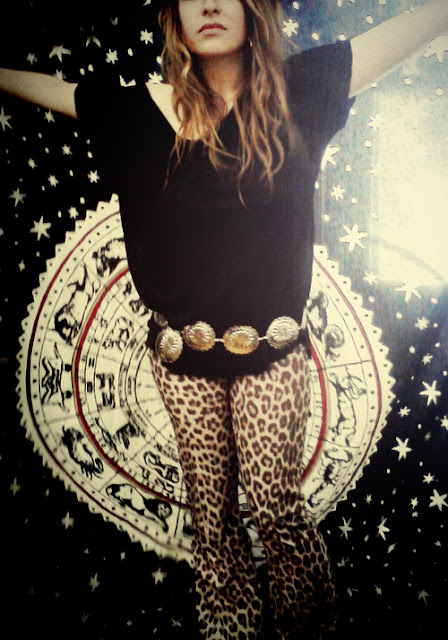 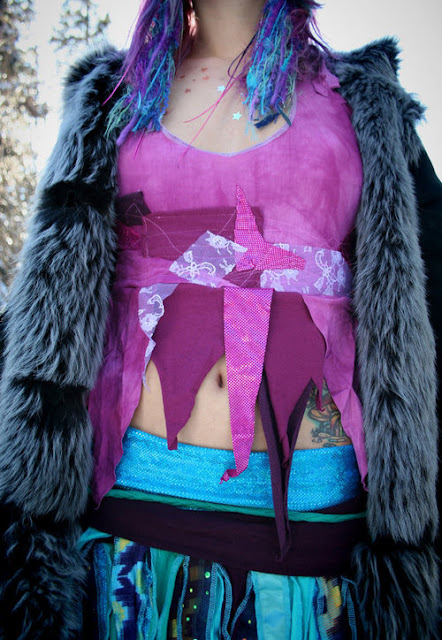 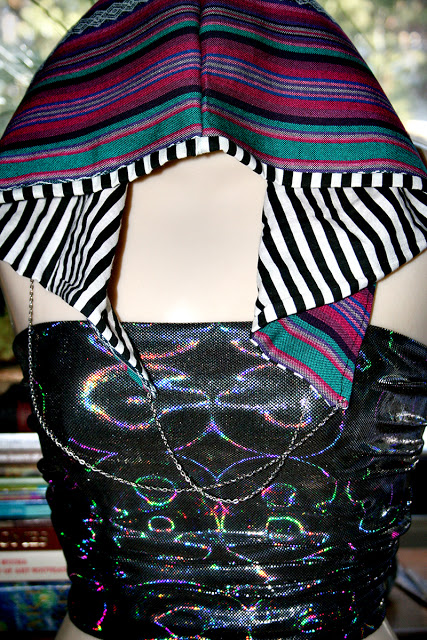